‘Don’t do it,’ they tell me. Their beautiful faces furrowed in concern. ‘Don’t go out there on a public platform and tell people the secret that you’ve been guarding for so long.’

Some of my friends and family are worried that people will think I’m a freak. They’re worried that it will hurt me to tell the truth about my mental illness, to come out in the open. And you know what? They’re kinda right to be concerned. Because mental illness is still so severely stigmatised, so widely misunderstood.

That’s why some of my nearest and dearest are worried. They’re worried that some people will turn their backs on me. That it will hurt my career. Because the world doesn’t understand. Not about crazy people.

But I am ‘crazy’. I have bipolar disorder. A mental disorder that used to be known as manic–depressive illness, and before that, manic–depressive psychosis, dual-form insanity, and circular insanity. Basically, whatever you choose to call it (bipolar, thanks), it means I’m mentally ill.

My kind of mental illness means that I’m flung from one intense emotion to another. From deeply dark, clutching, clawing, gnawing suicidal, utterly debilitating depression to delirious, maniacal, unpredictable, exhilarating highs. I have periods of stability and normal moods, but once I hit what we’ve personally come to call my ‘tilt switch’, I have no control. In either direction. My emotions run me. Sometimes they run me into the ground, sometimes they chase me into the stratosphere.

One of the first pieces of advice my psychiatrist gave me on diagnosis was, ‘Be careful who you tell. They’ll treat you differently.’

That was 10 years ago. And at first I was careful. Very, very careful. Only those closest to me knew. And only in slow, cautious increments. Admitting this new truth to my loved ones was deeply scary. But that truth was so often met with heart-achingly beautiful acceptance. Of course, sometimes it was met with a hopeful, ‘Can’t you just snap out of it?’ Oh how I wish. Or sometimes even emphatic denial. ‘You can’t be bipolar.’ They didn’t want me to be. Fuck. I didn’t want me to be.

It’s almost amusing to see how these strangers react. Some step away from you slightly, undoubtedly envisioning you appropriately sedated and wearing a straightjacket. At the very least, they start scrutinising your every action and attribute absolutely everything you say and do to the disorder, much like men attribute all women’s less-than-happy moods to a monthly cycle.

If you’re wondering why I would be so open about being bipolar, it is precisely because of these judgements that I am finally speaking out. I have to. Even if it means potential clients decide to pass me over, even if people I know start distancing themselves from me. Even if it destroys my chances of ever directing a feature film. I owe it to others like me.

Because it’s time for people to see the human and not the disease.

Because here’s the thing: as someone with an ‘unseen disability’, I’ve independently run my own freelance business for ten years. I’ve made short films and ghostwritten books. I’ve been the soldier at my father’s side during his long struggle against cancer. I am still somehow a light to my friends, a sister to my brothers, a daughter to my parents, a lover to my man, a mother to my cats and my Pit Bulls.

As messed up as I can be is as together as I can be. As dark, as light. As much as I need my friends and family is just as much as they need me. Basically, I can be just as good and bad and ugly as the next human being. So treat me like one. People with mental illnesses are exactly that: people.

Don’t judge us for the disease.

Read next: 7 Things You Need To Unlearn About People With Bipolar Disorder

People Are My (Bipolar) Medicine Too

The Silent Anguish Of A Single Mom 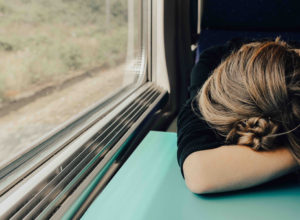