I gently stroked his face, tidied his mane, cradled him, and told him that I would let him go. I could feel how tired his 25 year old body was in that moment. It was overwhelming.

He stopped grunting from his colic and lay still. I kissed his nose and watched a tear roll down from the corner of his eye, joining mine, flowing freely.

He settled. And with that I spoke gently and said goodbye. Ten minutes later the vet did what she had to. With a horse it is never pretty. No nice syringes and gentle drifting. The size of the animal is just too enormous. I stood with him. I owed him that much.

His spirit was there for a while. It was only hours later when they came to fetch the body that he was really gone, an empty vessel with a soul departed. My donkey stayed with him. Watched over him. Said her goodbyes and respected him.

Mac chose me. My neighbour was moving and couldn’t take his horses. Mac had already bonded with myself and my little grey pony through the fence, and at the time I was trying my hand at learning to ride. I remember telling my neighbour I didn’t have money to buy him, and he said he would far rather he went to a good home with love, than sell him to a stranger. And with that, Mac joined our family. He was 12 at the time.

His history is somewhat questionable … a race horse, off the track, into dressage, into eventing. He wasn’t made for any of these. People told me how ugly he was. How vicious and unpredictable. How aggressive. I had farriers refuse to do his feet. And yet all I saw was a gentle soul, so large in his presence. So beautiful. Soft. Misunderstood.

He settled well, and I rode for a short time until I fell pregnant. But honestly, I had promised him I would let him live happy and free. Let him see that not all humans are selfish and nasty. Make up for those scars on his knees more than likely attained by falling out of the starting blocks. I took off his shoes, I let him roam, I fed him well, I loved him.

My horse friends all told me I was mad … that he should work. But I had fallen in love with this giant ‘marshmallow’. His smell. His gentle nuzzles. His curiosity. His strength. His beauty. His calls. A sentient being. Intelligent. Graceful. Powerful. Spiritual. A True friend.

It’s hard to tell 13 years in mere lines. The experiences. The moments. Him with my children. The lessons learned. 13 years was not enough.

He became something so much more than just an animal friend. A being that I almost had to remind myself was in the body of a horse. A relationship with this animal is like one never experienced. I have dogs, cats. I know those bonds are strong. This is something different that only people who have had the honour understand.

And so this boy who had been such an integral part of my life, took the journey forward. His presence is no longer. He has left a gaping hole and a sadness within me. But I will hold him in my heart and be grateful daily for the love he brought within.

Because that is love. An abstract emotion that we can feel so intensely, within us daily and especially in moments of pure happiness and moments of immense tragedy. There is always room for more. It comforts. It hurts. You hunger. You are satisfied. It’s constant … and when we live in just that moment of acknowledgement … it’s beautiful.

Read next: The Dog Who Never Gave Up

The Other Side Of Tragedy

To The Dreamer In You

The Surprising Reason It’s So Difficult To Let Go

To Self, A Letter Of Love 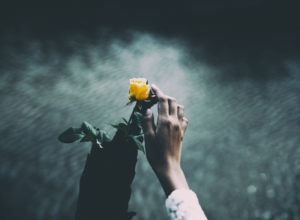