It was five months after my father had died, almost to the day, and I was totally fed up with myself. I had been trying to get ‘back on track’ with my life, but somehow I just couldn’t. I couldn’t shake all the unhealthy behaviours and destructive coping mechanisms I had developed in the two years that I lived in the metallic clutches of fear and dread while caring for a father dying of cancer.

What the fuck is wrong with me? I kept asking. Why can’t I get my shit together?

Feeling hollow, feeling ‘wrong’, feeling uncomfortable because my life just didn’t ‘fit’ anymore, unable to muster any joy or enthusiasm for any of the things I could normally fall into with unfettered joy.

I had spent weeks and weeks questioning why I couldn’t just get it together, why I felt so trapped and stuck and useless. Why I felt like unseen hands were gripping me tight and holding me back.

I thought it was because I was weak, that I had no willpower or self-control. I so desperately wanted to be okay that I was going all army commander on myself, bossing myself into little corners that I somehow would just not settle into.

And suddenly I realised that the grief was still there.

It had been there all along, holding me tight. It was that thing that I had so blindly been pushing back against, not knowing what it was.

I realised that just because I had decided that it was ‘enough’, that it was time to get over it and get on with my life, to pick up the pieces, to tell my friends that I was okay, didn’t mean that I actually was.

It was a relief, identifying my enemy. And in that relief and realisation came the tears again. Tears I had denied because I was in such a hurry to be okay.

Strangely, that acknowledgement of my grief actually made me feel better. I was suddenly calmer, stronger, more centred, more capable, more ‘me’ than I had felt in so long.

I gave into it, into the grief, and it was okay. I was okay.

It didn’t drown me, it didn’t shatter me to a million jagged pieces. It actually healed me. Released me. Made me feel better. I felt like the world could be okay again … because I had claimed who I was. For now, a woman grieving.

It’s weird, but accepting my grief unlocked not just my sadness, but all my other emotions too. Instead of feeling dead inside, my emotional body awakened again, and alongside the grief and the sadness flowed happiness and love and awe and wonder and peace.

I could feel again. The bad and the beautiful.

This Is For The Misfits

An Open Letter To Pit Bulls

Don’t Tell Them You’re Crazy. Oops. I Just Did. 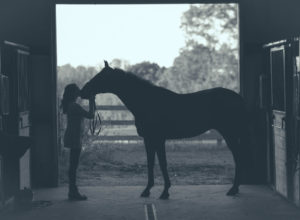