I tried to warm my hands over an old flame and got burnt. For years the smouldering embers of nostalgia kept me hot. And hungry …

Of course, my feelings of emptiness and despair had less to do with ‘him’ and more to do with all my own unresolved stuff, but somehow that didn’t apply to me.

He cheated and, when confronted, left me for her. Then he put a ring on her wedding finger. Of course, he’d told me marriage wasn’t for him. Just our love had been ‘enough’.

Well, clearly, it wasn’t. I was heartbroken. He needed to be punished. I wanted him to crawl back to me just so I could dump him in return and salvage my self-esteem. Ridiculous, I know, but I had justified my irrational yearnings as a need for completion ¬‒ ‘closure’ ‒ when, in truth, I felt powerless.

Like an addict, I craved the euphoria that being with him in the beginning had produced. ‘He hurt me, only he can make me better,’ went my skewed rationale.

For months, nay years, I never let the facts – the younger, prettier wife, for example – disrupt my fantasies of somehow recapturing those heady, halcyon days when he worshipped me. But did he really? Or had that just been me seeing what I wanted to see?

The constant ache of nostalgia and loss was something I kept to myself, until one day my soul cried: ‘Enough!’ And it was. What a relief to finally recognise him as a straw man, a fictional character buoyed up by my own fevered imagination and decades of disappointment. His opinion of me was irrelevant. He had no more control over me than a squashed insect on the windscreen of my life. He’d taken up space in my head for far too long, but only because I’d kept him imprisoned there.

Today, as I follow the Marie Kondo mantra of retaining only what ‘sparks joy’ – something that works as well for people as it does for those skinny jeans you’ll never again get into – I realise that the person that truly makes me happiest, is, er … well, me, actually.

Read next: The Surprising Reason It’s So Difficult To Let Go

Why Leave Someone You Love?

The Parent They Need

Drowning In Self Doubt? Here’s Your Lifejacket 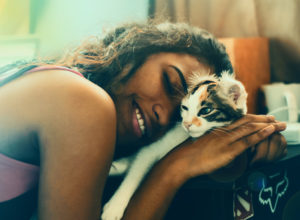