It’s a nightmare out there! HIV, STIs, sexual predators … dating in today’s generation is like playing a game of Russian roulette. But thankfully, there are precautions you can take to ensure, to a large degree, that you are reasonably protected from unwanted mishaps, disease, and abuse.

Before you meet them …

Empower yourself with information. Find out about the person you’re interested in. We all have access to the internet, so check out that dreamy-eyed human before you latch on to a player.

If their photos are fuzzy, if they’re hiding their eyes behind sunglasses, or are so dwarfed in the image that you can’t really identify them, it is definitely suspect.

Online dating makes it easier to meet new people, but it’s added layers to the effort of vetting potential dates and sifting out the cranks. Sure the ‘good ones’ are out there, and fortunately, the ghastly ones typically expose themselves early in the process, but you still need to be vigilant of the warning signs before you go on a first date.

If, for example, a message seems like a copy and paste format, it probably is and that person is out to hook as many ‘gullible’ contacts as possible. A friend of mine gets her potential date to agree to a telephonic conversation in order to see whether that person is willing to give up a phone number. Then she insists on an ASAP coffee date to assess that person before any lengthy time-wasting messaging.

On your first date …

Date cautiously. If your gut tells you to run, do so!

Never give out your address, work details, or for that matter, your real name until you are comfortable enough (give it at least a month) that they are who they say they are. This ‘lie’ about your name is the least of your concerns if that person turns out to be a predator of some sort.

Meet in a very public place. If you feel threatened, you’ll have access to a safe place to retreat to. Use your own transport, or get a friend or parent to drop you off and pick you up. Telling another person where you are going and that you will check in when you are back is seriously important.

Even better … take a friend along with you. They don’t have to sit with you but they can keep a beady eye on the proceedings, and if they’re close enough, can provide a second opinion later.

Watch out for the following:

• An excessively intense person who displays characteristics of dominance and control – someone with a temper, a pouter, someone who withdraws when they don’t get their own way.
• Someone who is so absorbed with themselves and doesn’t leave any space to include you. You may observe that all the conversations are directed towards them. They may not even ask you about your welfare or experiences, let alone your feelings.
• Obsessions and addictions. Is this person showing any signs of substance abuse?
• Lies and insensitivities. Is this person devaluing you or others? Is s/he telling the truth? Does s/he scatter the conversation with small white lies? These can easily become big lies and eventually, betrayal.

When you’re ready for sex …

Before you jump into bed, have that scary and uncomfortable discussion to go for a test … not just an HIV test, but tests for other sexually transmitted infections as well.

If you have the finger prick test, you should go for a second test three months later to cover the window period.

When one of you is HIV positive …

If you both get tested, and your partner is HIV positive … what then? What if it’s real love? Can you still be together? The answer is yes. If you really are in love and want to make a go of the relationship, HIV should never stand in the way.

Thanks to consistent condom use and antiretroviral treatment, serodiscordant relationships (where one person is HIV-positive and one is HIV-negative) are not just possible, they’re happening more than you know.

Yes, dating can be scary, but if you play it smart, play it safe, it doesn’t need to be.

Read next: Choose Someone Who

The Exquisite Healing Of Art Therapy

To My Friend Whose Husband Beats Her 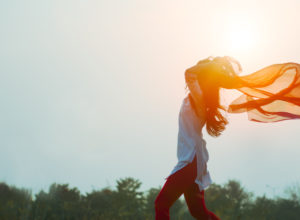