Bipolar disorder, just like any other mental illness, is buried under centuries of social stigma. But this is the age where the people get to speak. Not just those who try to control us. So maybe it’s time you take a listen. Because there are some things about bipolar disorder you need to unlearn.

Bipolar disorder is an illness that affects the brain. Asking me to snap out my depression or to come down from my mania is like asking someone with a brain aneurysm not to let it rupture.

No matter what I’ve been through, no matter what life has thrown at me, and no matter how messy I’ve been at times, so far I have a 100% survival rate. When I can’t fly, I walk, when I can’t walk, I crawl. And sometimes, when I need to, I stay still.

I’m not any more likely to commit a violent crime than ‘ordinary members of the public’. Substance abuse is actually the main cause of violent crime – in people with and without mental illness. Research it if you don’t believe me.

I don’t swing from mania to depression in seconds.

Calm down, this isn’t a Jekyll and Hyde movie. I won’t go from howling manically at your joke one moment to lunging for the butter knife to slash my wrists the next. That’s not how our moods cycle. Depending on the type of bipolar a person has, episodes can last days, weeks, even years. Not seconds.

It’s not about you, you fucking ego-manic.

My moods are not necessarily connected to what’s going on around me. Sure, external events trigger episodes, but sometimes I can also be on a downward spiral when things are going really well, or I ride a high while the shit’s hitting the fan. This isn’t an exact science.

Not every mood I have is an ‘episode’.

Sometimes you’re just that much of an asshole. I have long periods of stability between episodes, so stop obsessing about me and take a look at your own prejudices and insecurities.

I can be anything I want.

If I keep managing my disorder, if I keep building on my filmmaking skills, I will be just as capable of directing a feature film as any other skilled person who doesn’t happen to have an ‘unseen disability’. There are many, many people living with bipolar who hold high positions all over the world. You just don’t always know who they are.

Read next: The Day They Told Me I Had A Mental Illness

The Limitation Of Fear

Silly Girl, He Doesn’t Love You 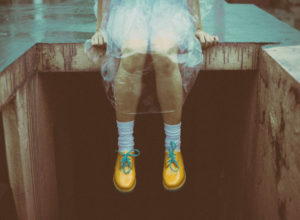